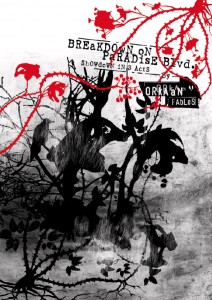 we did the show in early 2003. recorded the material in 2003 in amsterdam at studio le roy.

I mixed everything at realistic sound and it sounded too good to be true. but after that I was off to other projects so quickly that the material ended up sitting in my studio for all these years collecting dust.

in 2008 I packed the project on my bike and headed to msm studios in munich to let them see and hear the material. the music was finished. only the visual material we used at the show was as raw as it was 5 years ago.

they listened only for a little bit and said it would be a shame to release it in just stereo sound. if it was to become a DVD, as I had suggested, it should be surround mega double triple fat sounding! ok, I gave them the thumbs up and a couple of weeks later they let me listen to what they’ve done. I was blown away! to have all the little sound effects created on two computers combined with acoustic bass and a voice (hester boverhuis) from heaven in surround sound is like being the main character invented by william burroughs himself.

the video material ended up being a 40 minute video installation that’ll flip all your senses!

the DVD it now out on filmbaby.com