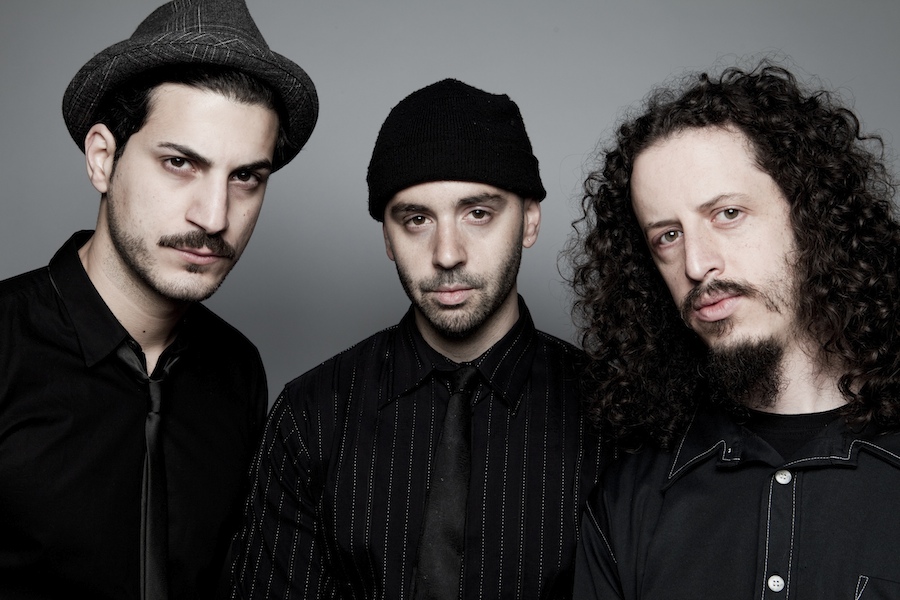 as many of you already know, I like to do experiments in the musicindustry and regarding every aspect of music making. this whole site is dedicated to that.

so, for the recording of my current project Music of Ghouls I came up with the following scheme.

1. I pre-recorded most of the 12 songs in my own studio in munich, playing almost all the percussion tracks on the upright bass. the bass is the ideal instrument to not only play notes, but to make it screech and punch it anyway possible to get interesting sounds out of it. there’s a whole genre based on it. my favourite bassist being Joelle Leandre from paris, whom I had the pleasure studying with in 1998. check her out, she’s amazing.

so, about 10 of the 12 songs already have all the percussions tracks.

2. now I’m in new york and I decided to ask my friend Steve Blanco, if his new not-fitting-into-any-category 3 piece band (drums, keyboards, guitar) would like to record the album with me. instead of hiring freelance musicians and putting a band together I asked an existing band to play with me. this has one bis advantage, they’re well rehearsed, have good chemistry going on between them and they know what they are doing and what their sound is.
the aband is called El Chico Blanco, check them out.

3. since most of the percussion tracks are already done I only need drums on 2-3 songs, which I wanted to record live to get a live atmosphere on the tape. the other tracks will be only my percussions, bass, vocals, plus guitar and keyboards. the other 2 songs will be live band plus my vocals.

4. I decided that for the live tracks with the full band I don’t want to use any bass on the recording. I want the band sound of El Chico Blanco and I’m afraid I would water it down if I added my own bassplaying.

the recording process experiment: this is the real challenge here.

5. instead of doing rehearsals and then the recording I limited the time of both to 2 days. yes, two days to rehearse and record an entire album. we’re going to rehearse intensely in the mornings and record in the afternoon. this way everything we rehearsed stays fresh and the recording will still have that kind of raw and unpolished sound I aim for.
the big challenge here is the timeframe, of course. there’s no room for bullshit or distraction of any kind. we’re going in, set up, play our hearts out and that’s what you will get on the CD. another benefit of doing this is, that I can record the rehearsals, too, and maybe there’s a couple of tracks that can go on the CD as sort of a bootleg prior to the finished recording.

6. the rehearsals will hopefully be streamed live online. we still have to figure out the internet connection and how to best set it up. if all fails and the live stream is not possible I go to plan B, which is to video tape the rehearsals to provide a video for you of the creative process of those two days. I’ll let you kknow the status of the internet issue so you can all tune in when it happens.

this is a real challenge, because I set the timeframe very tight and I hope we can get everything on tape that needs to be recorded. I believe we can pull it off, because the band is excellent and the musicians are strong musical beasts with a fullhearted can-do mentality I’ve seldomly come across.

here are the dates:

Comments Off on Music of Ghouls recording experiment